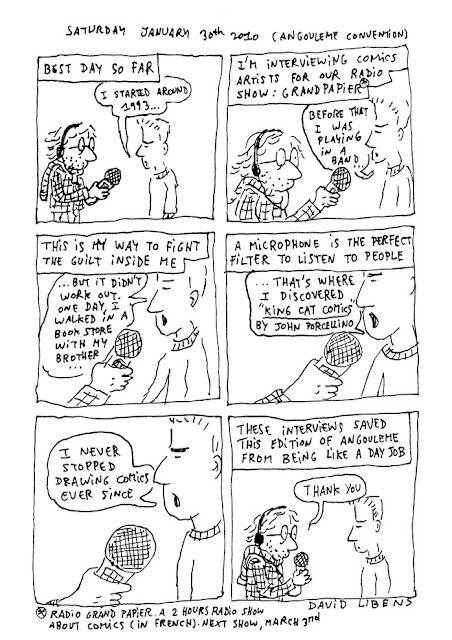 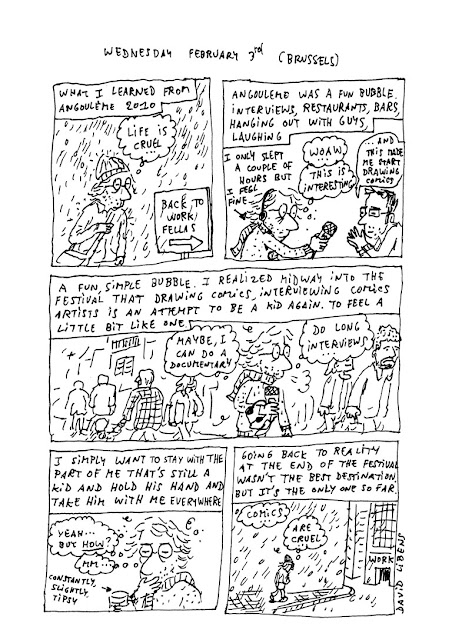 Is the show podcast? I've been looking for a french one.

yes the show is podcast.
You can find the first 2 shows here:

who was it who said they haven't stopped drawing comics since stumbling across an issue of King Cat?

Jeff,
to be honest this character in this particular page is a combination of several people I interviewed.
But I clearly remember Nylso in his interview, mentionning how he discovered John P.
http://nylso.free.fr/Blog/index.php

Nylso was probably the first one who translated John P. comics in french in his zine called " Le Simo". You should check the wonderful pages of Manix, his girlfriend at the time who sadly passed away in 2001.
http://www.flblb.com/Joelle-Guillevic-Jo-Manix.html

Jonathan Larabie (http://jonathanlarabie.net/) I'm pretty sure mentionned King Cat in his interview too.

As for the radio show, the next show is on March 3rd. For this 3rd show, believe it or not I will talk about you and your comics. At least in the "autobiography" segment of the show. The podcast is always available a few days later. If you want to listen to it live, it will be March 3rd 10.30 am (L.A. time).
As for these interviews of comics artists they will only be aired in a few months. They first have to be somewhat edited.

LOTS OF OTHER PAGES FROM ME (IN FRENCH)